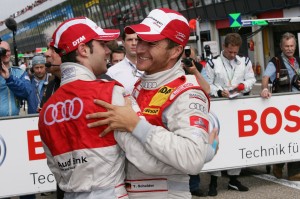 Zandvoort, August 21, 2010 – With a record lead with respect to the DTM’s current qualifying format Timo Scheider clinched the pole position for the DTM race at Zandvoort (Sunday, starting at 1:45 p.m. – local time – on “Das Erste”). Quotes from the Audi squad.

Dr. Wolfgang Ullrich (Head of Audi Motorsport)
“It’s very nice that Timo (Scheider) has come back with this performance and the pole position. I’m optimistic that he has regained his usual form. Miguel Molina managed to deliver a very positive surprise. Making it into Q4 in a year-old car on this track – I can just take my hat off to him for that. ‘Eki’ just very barely missed making it into the top four. Surely, he wasn’t satisfied with his lap. But at least he’s in front of Bruno Spengler. We’ll try and convert that into a good team result on Sunday. That’s possible and we’ll concentrate on that.”

Timo Scheider (GW:plus/Top Service Audi A4 DTM #1), grid position 1
“This feels incredibly good, especially after it’s been such a difficult season so far. Coming back in qualifying here at Zandvoort, on one of my favorite tracks, is really special. Particularly after such a difficult early phase it feels good to get everything right. Another thing that feels good is the trust that the team has put in me from the outset – even at times when things weren’t going so well. The guys have been working hard, and so have I. We had to be patient to show that at some point in time we’d get it together again. We showed that today. And I’m proud of it.”

Miguel Molina (Audi Bank A4 DTM #18), grid position 4
“A wonderful result. We did a very good job of working with the car and came up with a nice set-up. This track suits me very well. Now I’ve made it all the way into Q4 in my first year in the DTM, which is a very difficult thing to do because all the drivers in this championship are very good. Q4 is fantastic. My thanks go to Audi and to Abt Sportsline, who helped me very much. “